Toys, games and fun -- what Lulu the beagle likes to do 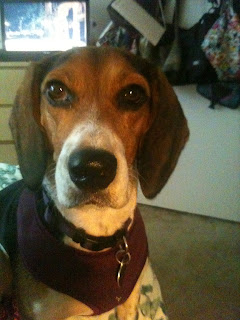 Outside, she is all business. She likes to sniff and run and chase dogs and other animals (read: squirrels).

But inside, when it's just her and me, she is a playful puppy. Especially when she wants my attention.

And this is her favorite game when that happens. 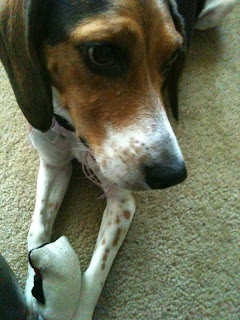 She brings me a toy -- usually a rope, or this old cloth snowman toy she has. 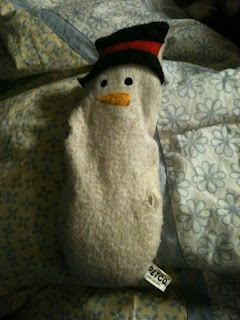 I swear that thing had more fluff... and a squeaker... at one point. But, she still loves it.
So she brings me her toy, and I go to take it from her, but she doesn't give it to me. She walks away. 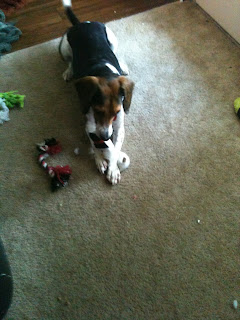 So I go to grab it from her. Now there's a chase around the room. And when I finally catch her, there's this: 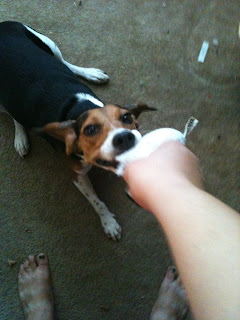 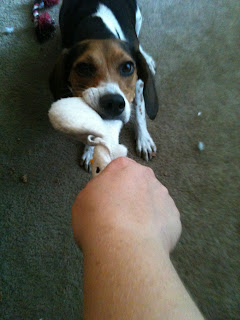 And we tug and tug until finally, she drops the toy. 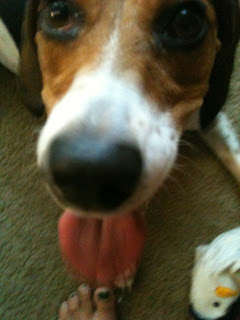 Now, I'm sure there's some bad behavior in this, particularly in the refusing to give the toy, that I shouldn't condone. But she's generally pretty good with other stuff, so I think as little keep away just keeps her entertained.

What kind of games do you play with your dogs? 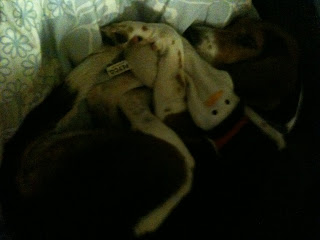 Doggy Meetup? Getting dogs (and their owners) together in Orlando

I went to my first Tweetup last month at Crave in Orlando. It was fun. I enjoyed finally talking to people I've only ever seen on Twitter. And I decided I wanted to do it again -- but this time I want to bring Lulu, since she really is the star of this blog. 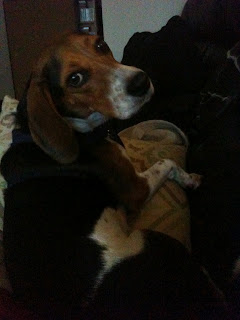 And she knows it.

Anyway, I've looked for dog meetups in Orlando on meetup.com, and I haven't found any. No real puppy playgroups, no breed-specific groups, nothing. Could it be we're all too busy?

Well, I want Lulu to meet some dogs she can see on a regular basis. And if there's one thing I've learned about becoming a dog owner, it makes you more social. Maybe we have to commiserate more than cat owners?

So I'd like to set a doggy tweetup for the fall, assuming my schedule is conducive. I'd set it at a park -- likely in Orange County. Barber Park is very nice: 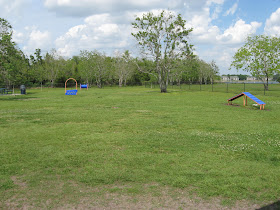 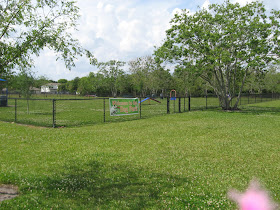 It's more centralized, and a really nice park. I think I would have to ask Orange County for permission to use it at an event though, right? And of course the problem with all these parks is that they are broken up between small and big dogs. I would consider Fleet Peeples Park in Winter Park, which isn't, but I've never been there and I don't really want to deal with the city.

Any local people have any suggestions, or experience in doing this?

HELP: How do I deal with a barking dog?

Lulu's howl was part of the reason I asked my parents if I could have her after my apartment was broken into last December. But lately her bark has become a problem.

In the last two weeks, Lulu's been howling at every thing -- people outside my apartment building, people on golf carts, kids on skateboards. She even tried to chase a moving truck the other day.

Today was the worst though. There's a man that owns this big black dog in my neighborhood. Now, Lulu's not had any problems with the man himself, but every time that dog is around she barks in a very defensive manner. It's very clear she's barking to let the dog know to stay away from her.

Well today, that went from defensiveness to downright hostility. I had to wrestle Lulu to keep her from trying to go after the dog when we went on our walk. I grabbed her and held her up and tried to get her to calm down, but she would not. I eventually dragged her into the house. Since the ground was muddy, she was a mess, so she needed a bath.

I don't know why she's suddenly become so crazy. The only thing I can think of is that she had her distemper vaccine last week, and maybe it causes behavioral changes similar to the rabies shot? But I can't find anything about it.

What do you think? Any ideas? I don't know what to do and I'm worried she's going to get into trouble with the leasing office.

In trying to make sure I post weekly, I've decided to add a new section on beagles who urgently need rescuing. They are, sadly, not hard to find in America. Many beagles are given up because they are no longer able to hunt or breed, no longer of use to a research laboratory, or just because they are too old. They all need good homes.

Beagle Freedom Project, which I've talked about in a previous blog post, is helping many beagles who have been wrongly discarded find new homes.

One of their most urgent charges is Molly: 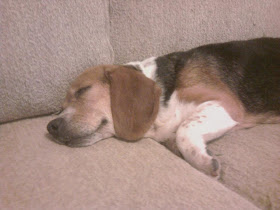 
From speaking to numerous veterinarians who have seen Molly and local rescue organizations, this is what we believe may be Molly's background...

They are given no medical care other than a "country vet" that comes by yearly to administer rabies vaccines by NC/SC Law. Once they are physically unable to have babies, they have outlived their usefulness and are dropped off a few miles away, often in the woods, to wander until they are attacked by another animal, hit by a car, drop dead for a number of ailments or are rescued. Some breeders will spray paint "DO NOT RESCUE", "DO NOT SAVE" or simply X them in orange spray paint so that people cannot take them to animal control or to a shelter. Luckily, someone saved her anyway.

Molly may have been a breeder dog whose puppies were sold to laboratories but we cannot say for certain. In any case, Molly has undergone the worst conditions of any animal and was almost put to death a second time as she was on the PTS list aka Death Row in the animal shelter. Today, Molly is free and with her foster in North Carolina but has a long road ahead...

Molly still needs a lot of help. She has glaucoma in one eye that is causing her pain. She also has heartworm, four tumors and a hernia. She is getting help, but Beagle Freedom Project needs money to help pay for her care, and she needs a permanent home. 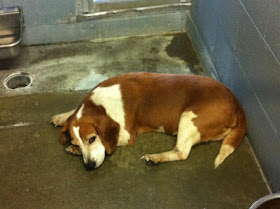 This poor boy was found in the country as a stray, mostly likely set loose because he was no longer of use to hunters. He is currently in a temporary foster home, but he comes from a high-kill shelter in Owensboro, Kentucky. He needs a permanent home. You can find more info about Frankie on the Petfinder website.

Now if you are not near any of these poor animals, there are ways to get them and transport them to you if you want to adopt them. There are groups like Pilots n Paws that will fly pets to forever homes. You can apply for transport here.

As always, Petfinder is a great reference if you're looking for groups in America or Canada. You can also use beagle.rescueshelter.com to find groups in other countries.

Since I'm from Florida, here's a list of Florida rescue groups for beagles: