Almost (Wordless) Wednesday: What beagles can teach us 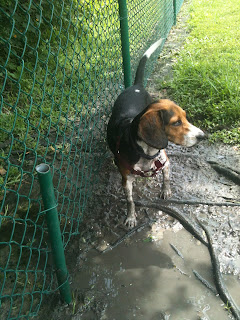 Playing in a muddy puddle never hurt anyone... 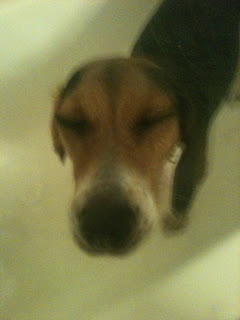 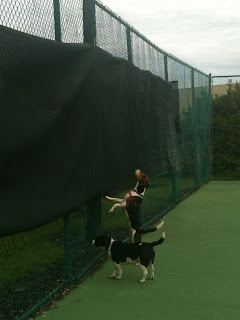 Always try to scale the heights -- no matter how high.

Sunday in Sanford -- Dog park, German food and more in the Historic District 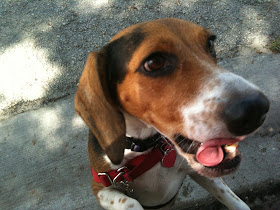 I have no idea how she did that with her tongue.

We've been pretty lazy lately, and I decided I wanted to go for a long drive and check out something new. So we went to Sanford.

Sanford is a city on the shores of Lake Monroe in North Seminole County. Lately it's gotten some notoriety in the news, but if you're in Orlando and you're looking for a day trip, or if you're headed to the beach, it's a great place to stop. The Historic District is great, especially if you have a dog.

So Lulu and I hopped into the car and drove off to our first stop. 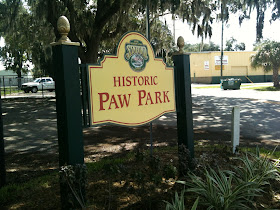 Sanford says The Paw Park is the oldest in Central Florida. It was first established in 2001. It has some good reviews from national magazines. 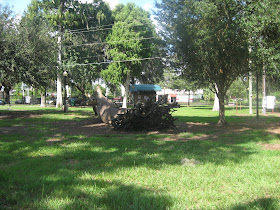 It's compact, with parking on three of the four sides. Each entrance is a double entrance, and the east entrance includes an entrance into a small dog play area off to the side.

In the center is a big downed tree and a community bulletin board. There is a walkway that wraps around the park, and there are benches and shade trees.

But the dogs are more interested in each other. 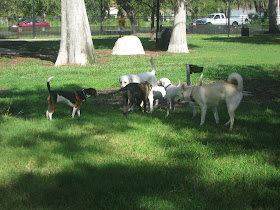 There wasn't a ton of running going among the dogs, but there was plenty of sniffing. And when it comes to sniffing, Lulu is a champ. 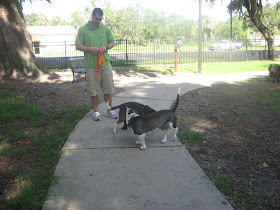 She walked the whole park and sniffed just about everything. And every one.

It's a nice little park. There were places for the dogs to climb, there were water areas and even a time out area.

My only complaint is the dirt. There were several dirt patches, and where there's dirt there's a dog who wants to jump and roll in it. The little doggy pool was full of dirty water, and I don't think there was anything that could be done to get that pool clean.

Conveniently though, there's a dog wash and groomers right across the street. 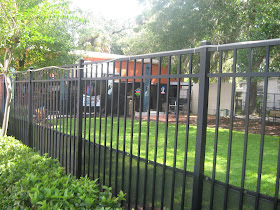 That's Paw Park Place, which also has a little mini area of its own for dogs to play at, grooming and a boutique with fresh baked doggy treats and a case full of frozen "dogurt." Unfortunately they wouldn't let me shoot any pictures inside.

After Lulu and I took a look around, we got back in the car and headed back onto First Street to a place I've always wanted to go. 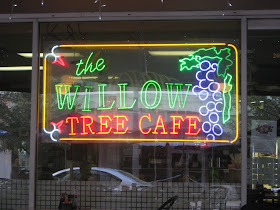 Hollerbach's Willow Tree Cafe is very popular and well-known., but when I found out this German eatery was doggy friendly, I had to check it out. So Lulu and I got a seat on the patio, danced a little to the beer garden-style music playing, and ordered a schnitzel.

Before long the waitress brought an iced tea for me. Just water for Lulu, thanks. 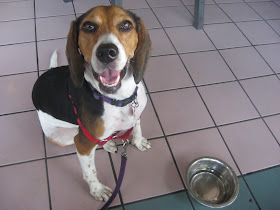 Willowtree doesn't have a doggy menu, but they had no problems letting me order something for Lulu.

So my schnitzel came: 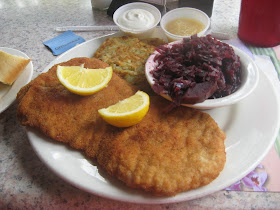 (It was yummy, by the way)
And Lulu got a bratwurst. 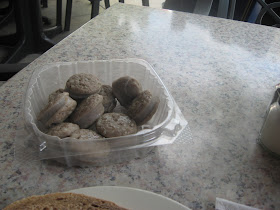 Cooked and cut to order. 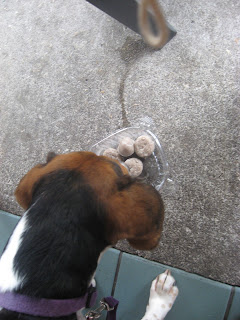 The Willowtree Cafe is open for lunch and dinner every day and is located on East First Street in Downtown Sanford. They also have Magnolia Square Market around the corner, but the market doesn't allow dogs inside.

If German food is not your thing, there are several other restaurants along 1st Street that allow dogs at the table. There are also lots of lovely shops to window shop in, and the marina is right up the road if you want to sit out and enjoy Lake Monroe. In fact, Lulu and I drove right next to the lake on our scenic route home.

Paw Park Place is open Tuesday through Sunday, and is located on South French Street, right across from Paw Park.
lifewithbeagle at 8:21 PM 8 comments:
Share 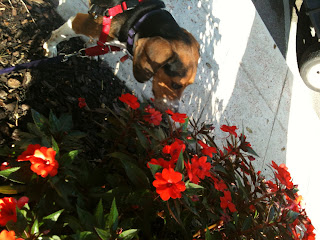 Beagles teach you to stop and smell... well, everything really.

Pets can be domestic violence victims too: How you can help Harbor House open a shelter for pets

Imagine this: you live with your significant other, but that person is extremely abusive to them.

You want to be free, but you have a dilemma. You don't have any children -- but you do have a beloved pet that is like your child. And if you leave that pet behind, you don't trust your significant other to do something to your pet in retaliation.

You don't have anyone to turn to, and you call the local domestic violence shelter, but they can't help you because they don't take pets. So what do you do?

This is the reality for many people, both men and women, in abusive relationships across the country.

But in Orlando, a first-of-its-kind facility will soon open for people in this situation.

Harbor House of Florida, which has an emergency shelter for domestic violence victims, will open a shelter in October for their pets. 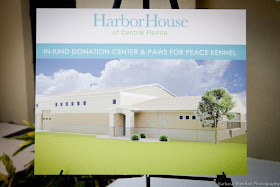 "There's nothing like it," said Kat Kennedy with Harbor House. "We are so proud with what we’ve been able to do with the community support, that’s the only way this could have happened. It's an industry first."

Kennedy says that only 70 domestic violence shelters nationwide have some kind of provision for victims with pets. But nothing like this.

When finished, the Paws for Peace Kennel will have all the charm of a pet boarding facility. It will include 10 runs for dogs and 10 for cats, plus a place for little pets from rabbits to parakeets.

It will also have a fresh air porch for cats, play facilities for dogs, grooming tables and more. 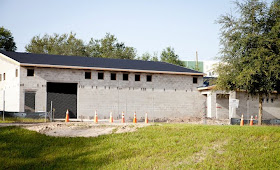 "The animals are incredibly stressed when they’re moved to a strange location, without the trauma they’ve probably been through in an abusive home," Kennedy said.

Is this a needed facility? Kennedy says Harbor House gets one or two calls a week from people who call the emergency hotline asking if they can bring their pets.

"We try to set them up with foster homes," Kennedy said. "But people want to be with their pets. They’re all traumatized, and they want to be together."

But while the shelter is moving forward, Harbor House still needs help.

Here's what you can do:

You can go to the Harbor House of Florida website to donate money to the facility in one of several different ways, including a straight donation, purchasing a tile or donating money to get special Kuranda dog beds for the shelter.

You can also donate items. Harbor House has a list of items they need on their website. Check out the list (you need Adobe Acrobat reader), and then email the person below for more info.

All photos courtesy of Harbor House of Central Florida.
lifewithbeagle at 9:16 PM No comments:
Share

Have you ever heard of Natural Balance pet food? 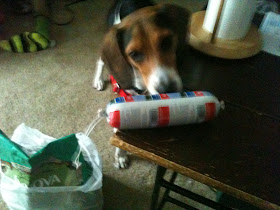 Lulu is particularly fond of their beef rolls.

The trainer at Petco calls it puppy crack, and I believe it. Lulu can eat a whole 1 pound roll herself (she's done it on my. Twice.). 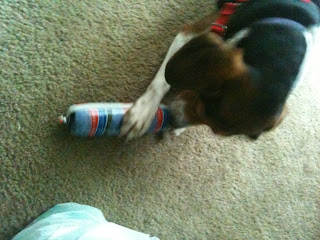 Natural Balance was founded by Dick Van Patten (8 is Enough, SpaceBalls, etc.), and they are dedicated to making high-quality food.

Now they are helping out a charity, and they need your help.

Angels in Fur has been around since 2006, and they've worked to rescue dogs from pounds or neglectful owners and get them new homes. They've rescued 1,000 dogs to date.

It doesn't cost you anything. Just go to Natural Balance's Facebook page and become a fan. They will donate one pound of food for every new fan, up to 5,000 pounds. 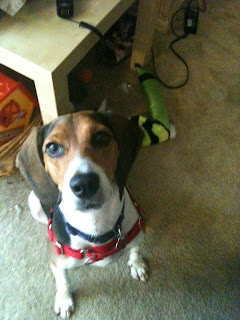 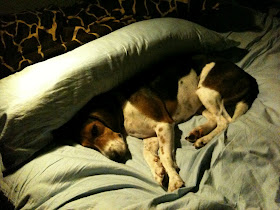