You know your dog's a beagle if... The Tail 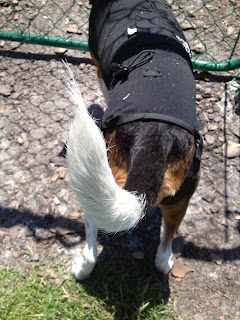 First of all -- the main purpose of the tail is to help guide the dog. It is supposed to help them balance their bodies when they're walking on something narrow (like a sidewalk), or to help them when they swim or make turns.

But the tail, especially for a beagle, has other important purposes.  And that's what we are going to talk about.

You know your dog is a beagle if... 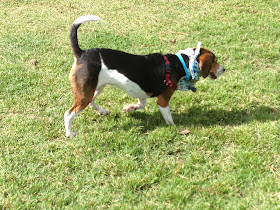 1) The tail looks like it's been dipped in white paint.
A proper beagle should have a white-tipped tail. That white fur is a product of breeding. It's so that hunters can find the beagles while they're chasing their quarry. The tail also shouldn't curve too much, but if you have a couch beagle and not a show beagle, that doesn't matter.

I also notice that, when grooming beagles for competition, handlers fluff up the white part a bit, so it looks like a bottle brush almost. Just a thought if you want your beagle to look fancy.

2) The tail ain't up, they ain't happy.
The tail should be up. Pretty much always. If the tail ain't up, beagles aren't happy doggies. In fact, breeders call it the gay tail, and you kind of get that when you watch the tail. Beagles are one of the breeds in dog shows that have to have their tails up in the ring or they won't go up. So you will often see handlers try hold their beagles tails up and get them to stay up.

3) It seems that tail never stops wagging.
I sometimes call Lulu's tail a metronome. It seems like it's constantly moving back and forth, particularly when she's out on a walk. Well there's actually a word for that, and it's called feathering. It's especially true when beagles are on the hunt for something.

But just because the tail is wagging or up, it doesn't mean they are always happy.  There's an article in Psychology Today on the website that is very interesting. For instance, did you know that if the tail wags more to the right of their butt, it's a positive tail wag, but if it wags more to the left, the dog is possibly exhibiting negative feelings?
4) They have a tail malady named after them.
I spoke earlier this week cold tail. It is also known as beagle tail. It happens in some working dogs like labs or beagles when swimming or doing heavy activities. Then their tail goes kind of limp, and it actually hurts at the base. The only thing that will help is time and anti-inflammatories.

But be careful -- it may be something more than that. It could be a problem beagles can get called Intervertebral Disk Disease. It can happen anywhere on the spine, but when it does the dog might go weak in the legs, or cry out in pain, and may have pain on the base of the tail. So no matter what, follow up with the vet.

5) The tail is docked.
There is a lot of controversy on tail docking. It's done with many breeds, including beagles. In the case of beagles, part of the tip is taken off field beagles because they can get tangled in briars, brambles and high bushes, leading to tears and bleeding. Hunters in the UK and the US sometimes dock the tail.

The American Veterinary Medicine Association is against tail docking. They say that it can be extremely painful for the dog, even if done when the dog's are young and the tail is not fully developed.


TELL ME: What other things about the beagle tail have you noticed, or I've missed?
lifewithbeagle at 5:39 PM
Share