Everyone is so excited about the solar eclipse today.

And online there are some saying keep your dog in the house, some are saying you don't need to because they won't look at the sun anyway.

Scientists are very interested, however, in how your pets will react in general. 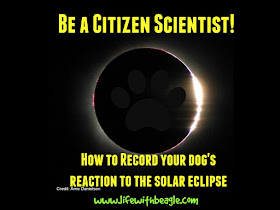 It's called the Life Responds project, and scientists at the California Academy of Science want your help.

The team is asking you to become a citizen scientist.

You'll make at least three observations. You can make more than three, but these are most important:

What should you look for?

You know what your pets should be doing normally during the day, right? So watch what they are doing during the eclipse -- are they howling, are they laying down, are they hiding? Not saying they will do any of those things, just offering suggestions.

Most scientists say animals and plants seem to react to the eclipse the way they react to the sun setting. So if your beagle is suddenly looking for his dinner -- that could be an interesting reaction.

Will they look up at the sun during the eclipse? Most likely not. It's not common for animals to do anything so unnatural as to look at something that will hurt them. But just in case, might be best to just leave them inside during the eclipse.
lifewithbeagle at 1:12 AM
Share