Lulu and Jasmine love jerky treats! Especially from Spot Farms and Full Moon! We reviewed their new Duck Training Treats back in December. We have another review coming up soon!

But, good jerky treats can be pricey. And you always have to watch out for less than reputable companies too.

So this weekend I attempted to make my first ever batch of treats. The dogs seem to like them -- maybe your dogs will too!

So here are my Porkchops and Applesauce Jerky Treats, using a modified recipe from Kol's Notes. 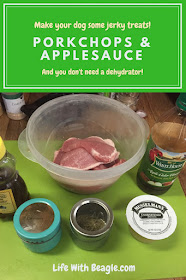 Jasmine has a chicken allergy, so I'm staying away from poultry when it comes to treats. Pork is reasonably priced, and I can get decent quality pork chops in a variety of sizes. And they enjoy it.

I'm using a modified recipe from my friends at Kol's Notes. Jodi Chick has been making all kinds of treats for her dogs for years, and she's like a DIY queen. Also, her recipes for jerky treats have an oven alternative, which is great since I don't have a dehydrator.

Ingredients:
Jodi's recipe for DIY Flavored Chicken Jerky calls for 3 lbs. of chicken breast. But since this is my first attempt, I'm only making a pound. 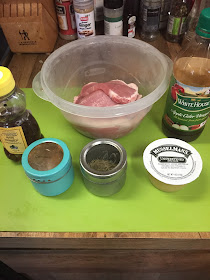 For the record -- I tend to do these things by eyeballing them. I'm breaking down measurements Jodi's recipe here for you.

Assembly:
1. Combine ingredients in a container you can cover and mix well. (NOTE: I decided later to cut the pork chop slices in half. You can do it now). 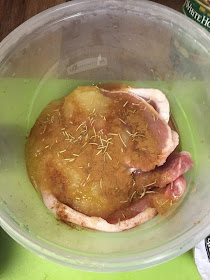 2. Cover, give the container a good shake, and refrigerate for at least 6 hours. 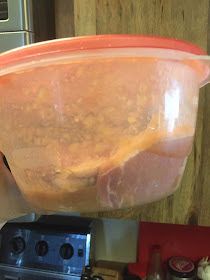 3. Preheat your oven to 425 degrees F.
4. Lay down some parchment paper on a cookie sheet.
5. Remove your pork chop pieces and lay them out on the cookie sheet.
6. Bake for 15 minutes or until cooked. 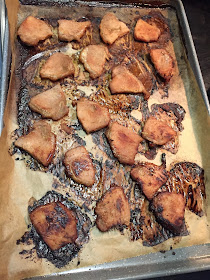 7. Reduce the heat on your oven to 200 degrees F.
8. Cook in the over for at least 3 hours, or until the meat is dry. It took about 5 hours in my oven. Be sure to flip the pieces occasionally so they cook evenly. 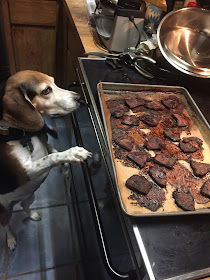 There should be no moisture in the treat in the center. Cut a piece in half to test it. Also, wipe any residue or moisture off the treats. 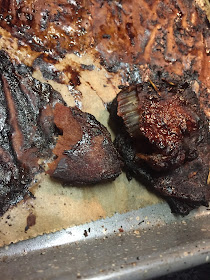 Store your treats in a sealed container in a cool dry place. 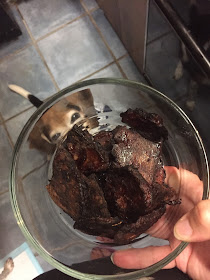 Don't refrigerate or freeze, because the moisture will cause them to go bad faster. Which is what I did when I made this batch. #facepalm

So I messaged Jodi and she said I can pop them back in the oven to dry them out again. Hooray!


What kind of treats do you make for your dogs? Tell us in the comments below!