No "thicc" beagles! 5 reasons obese dogs are not cute

When did thick lose it's "K" and become "thicc?"

Social media dog communities like Dogspotting seemed to have gained their own language when it comes to pups. Some of it is fun (I LIKE saying doggo!), and some of it is worrisome.

Because when I see someone posting about an adorbs "thicc" pup, especially a beagle, it's meant as a term of endearment. There are whole Facebook groups where people post pics of "Thicc" pups.

I'm here to tell you that, for the most part, a "thicc" beagle is not a cute beagle. It's a beagle with a serious health problem, and we should treat it as such. 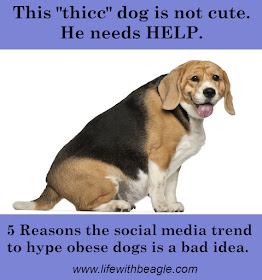 What the heck is "thicc" anyway?

Dogs, especially beagles, don't really have "right places" to be chubby. A few pounds to a 25-30 pound beagle can make a big difference.

It's why you see so many stories online about big beagles at shelters, like the stories of Kale Chips , who is doing much better after losing all that weight.

And it's often considered funny, like this video from South Korea:

I found this video on a Facebook group called "Thicc Woofers." "Thicc dogs also find love in other dog groups, including the popular Dogspotting groups.

No, it's not cute or funny.

1. It's a serious health crisis.

But beagle obesity, and in general dog obesity, is a serious health problem, verging on public health crisis in the United States, where more than half the nation's dogs are at least overweight.

Think of all the diseases a fat human can get (I do regularly, speaking as a fat human) -- heart disease, respiratory issues, more problems with muscles and joints and tendons because of the extra weight put on them, arthritis, liver issues and the list goes on.

Dogs can get the same problems. The difference is, even pet insurance doesn't make these conditions easier to manage financially. Lulu tore her CCL and it cost me $1,700 for the surgery. Then add in the cost of hydrotherapy to help her leg heal. Some of these conditions are far more expensive.

The National Beagle Club says what pretty much every beagle owner will tell you -- beagles have no mechanism to tell them they are full. A beagle will eat and eat and eat and never be sated.

So when your beagle flashes you those sweet sad eyes and guilts you into another half cup of food or another treat or maybe some scraps from the table, they will take it happily.

4. Sometimes there's a sad story behind it.

When an owner with dementia can't remember if they fed their beagle, another dog might stop eating. A beagle will happily take another bowl of food -- or a few extra treats. And they all add up.

And then something happens and these dogs end up in shelters because their owner can't take care of them.

5. Or there's a medical condition.

Some medical conditions can cause a dog to gain weight -- including Cushing's Disease and Hypothyroidism.

The last two are understandable problems, and not the owner's fault. But that doesn't give you a pass to put them on display.

This is not about fat shaming!

I know what you're thinking right now: why are you fat shaming dogs and their owners?

Does a dog look in the mirror and say "gee, I need to lose a few pounds?" Not to my knowledge. It's not the dog that's responsible for its weight problems. It's the pet parent who needs to be firm about this.

I don't think it's abuse or neglect, I think many owners just don't know better about how to properly feed and exercise a dog. But that means it's more important to help people keep their dogs healthy, not parade them around for their heftiness.

How can you tell a dog is overweight?

There is a chart that will tell you if a dog is overweight, and it's really easy.

For lack of a better term, your dog should have a bit of a waist. You should also be able to feel the ribs... though not profoundly.

Talk to your vet for help in maintaining your dog's weight. In the coming days, we'll have more information to help you as well.
lifewithbeagle at 10:45 PM
Share